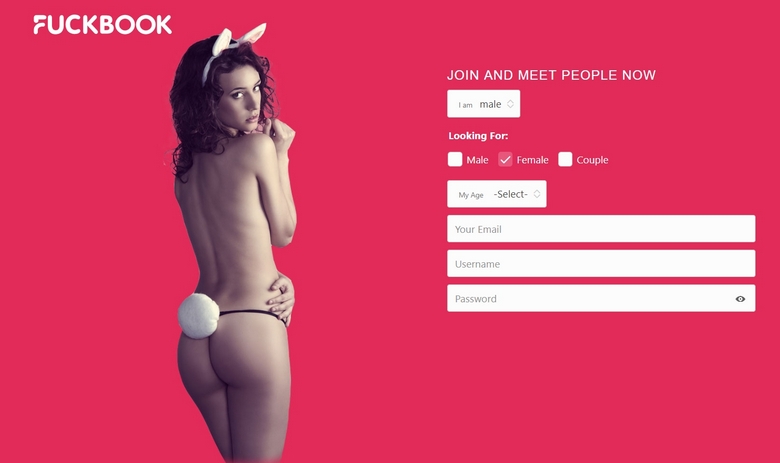 Who would name their dating site FuckBook? Apparently one that wants to subliminally imply that their social media platform is for fucking.

FuckBook is one dating site that has made a reputation for being hookup-friendly. It’s no secret that they help you get laid online.

It’s one of the more popular ones out there due to the subliminal implications of what it sounds like. It already sends a message of being hookup galore.

You’ve come to the right place as we talk about this thing called FuckBook right now. It’s obviously the main reason people actually log onto FuckBook. Name alone makes them assume that getting laid is a sure thing.

FuckBook proclaims itself to be the Facebook of casual sex. Well, upon landing on the homepage, it sure looks like it. Then you suddenly find yourself spending money just to use the platform.

Yes, FuckBook does cost money to use but you probably won’t think about it anymore since you are blinded but the chance that you might actually get laid.

Sorry to kill your hopes but…

A lot expect easy sex out of FuckBook. You have to remember that it’s still a social media or dating site. You can’t mess with free will.

If you are attractive then it’s worth your money. If you aren’t then you should be as rich as the website’s owners to even stand a chance.

Then there are the games where you have to intentionally disrespect a girl through a term called “negs” that make them doubt themselves and stoop down to a player’s level. This is just one of the many techniques of flirting and attraction.

The point is that FuckBook may give you a shot but it’s still up to you whether you deliver on that chance or squander it. You already know the name of the site. Even the most casual and subtle conversations lead to sex as long as you play the game right.

Then, there are the fakes

So going through FuckBook, it’s easy to fall into traps especially if you are a desperate nice guy. Some may have decent pics but there’s a chance that they are just catfishing.

You’ll be surprised by how good conversationalists they are. It’s like talking to Simsimi. These chatbots have structured responses that read through algorithms of your sentence structure.

Well, we did not experience any in our time here but we do not need to drop accusations or hire an investigative hacker to find out that some accounts are scams and spams. It’s not even FuckBook’s fault that somebody decided to create a fake account.

Let’s just hope others experienced the same safety we had. The first thing you’ll notice is how FuckBook looks exactly like Facebook on the landing page. It’s only the color that differs.

It’s also the same when it comes to initially set up your profile, indicating your gender and asking you whether you are interested in men or women.

Then you log in and see your news feed where you can create your own post. There’s a timeline where people can see your pics and posts on the news feed. It’s a good way to express yourself and make yourself known on this Facebook for hookups.

Of course, it’s still a popularity game as the posts with the most engagement are likely to be suggested. Expect your DMs to explode with messages from people in your area if you are famous on FuckBook.

One of the most-used features of FuckBook is its live cam page, which you will need a separate membership for.

There’s also the  “Find Your Love” and Flirt features which will require you to upgrade your account. That is the only time you can see your messages, friend requests, and who has looked at your profile.

The most notable feature is how FuckBook made their messenger feature look exactly like their wholesome counterpart. It’s like they really intended to piggyback on identity. You can’t simply play it cool on FuckBook. Their quality control is top-notch as they utilize a karma system. It gauges how you interact with fellow members.

A person will be given a bronze, silver, or gold rating depending on how they use the platform. Don’t expect to play it cool and rank gold. You won’t get anything if you don’t do anything.

They did this in an effort to eliminate stupidity where you matched with someone but never chat them at all. You can leave that attitude on Tinder!

It’s just sad to think that FuckBook named themselves such but getting laid still isn’t a sure thing. Well, to be fair, they can’t alter the laws of nature. No amount of genius can suddenly alter trees to have sex and humans be embedded on the ground to grow up to the troposphere.

You’ll probably get more failures than successes on this website. “FuckBook” is just a marketing trick to lure you into signing up and paying. We still had to make the necessary efforts when we were on the platform.

Since we are experts at this, we were able to score some no strings attached sex. You need to step up if you plan to do the same.

Honestly, it’s better to practice your game on the wholesome social media sites and Tinder first before you jump onto FuckBook. This one is for the pros in the game.

It’s hard to ignore the nice and slick design of the website though. Fuckbook has established legitimacy through that alone.

The bottom line is there’s no cutting to the chase here. Surrendering your credit card info does not constitute to sex. It’s just a means of making your chances easier.

FuckBook is a place to get laid. It’s just not as easy as they tell you though.