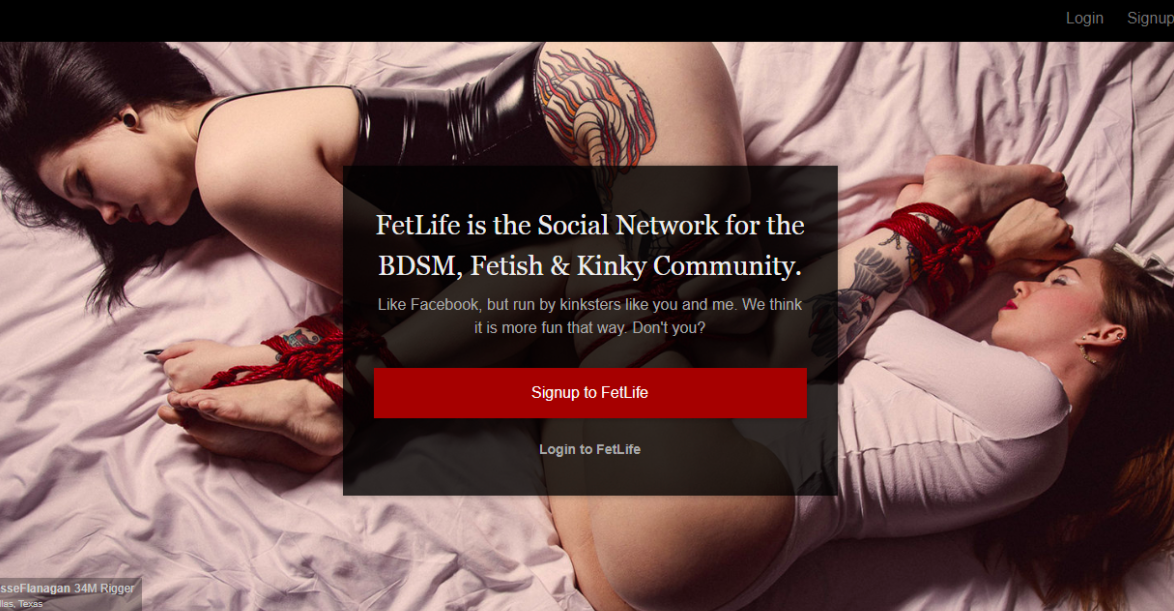 What? A dating site where kinky happens? If you are signed up on a platform named FetLife, that’s what you have to expect.

The kinkier side of dating has reached online as this has become more accepted in today’s time. If sex is, then the activities that pertain to it come too.

That’s why we took a look at FetLife and tried it out just for the kicks. Or should we say kinks? Anyway, here’s what we can say about it.

Dating with fetish play at FetLife Its purpose is obvious. We now live in an age where fetishes are no longer considered as taboo as it used to. That way, online dating has found some institutional voids.

FetLife has been in the game for a dozen years already. It has given fetishists another platform to organize and communicate since 2008.

You can probably blame them for the kinkiness growing on social media. Those who are into it are likely already on the platform.

Members as of this writing. That number is still bound to grow as new creative ways to be kinky emerge.

FetLife tones down the kink a bit too

It usually was users creating groups where their level of kink falls under. As all unmoderated platforms with too much leeway, things get out of hand. Thus prompted FetLife to temporarily halt the creation of groups.

Words that suggest murder were eliminated thus, groups that had words like blood, needles, rape, or incest were eradicated before FetLife reinstated the group creation feature.

Once you sign up for FetLife, you will automatically be joined in an announcement board where users are updated with the changes in site policies and news.

FetLife pays to focus on its groups more than other sites. It’s like another social media site with a niche. The site doesn’t literally look like Facebook but it seems like it since you have a wall for friends updates where you can engage with fellow users.

There’s an “Explore” section that looks like a blog site where random posts appear in a gallery-like layout.  It makes use of machine learning to sort the feed according to your preference.

FetLife’s more popular section is its “Kinky and Popular” obviously. You can also see a variety of small sections which might suit your kinky interests.

We’ll now talk about the groups more. This is where communities thrive as users can simply join one they either want to learn from or share thoughts of.

The site sorted each group by either by its popularity or its newness. You can even start building your own provided you follow FetLife’s rules in creating one.

We were even able to plan out a sex-inspired travel itinerary with some of the people active in each city. Something fun to look forward to.

Let’s talk about the aesthetic

First thing we noticed about the site design is it’s indeed for the kinky. Some might look for a lighter colorway but just imagine you switched to dark mode.

Regardless, the site design looks neat unlike some of the same niches that look too cluttered. FetLife is easy to navigate because it’s straightforward which makes it easier to use.

FetLife doesn’t have that much ads. Signing up is also free which is extremely rare on any adult platform nowadays. It’s simply discounts on products from their affiliate businesses but these ads aren’t pushy at all.

The site focuses more on serving its kinky user base above everything so you’ll definitely appreciate it. Overall, we loved our experience with this website. It gave us an additional perspective in the world of all things kinky. An easy to use platform combined with it’s fairly pleasing aesthetic is also a plus for us.

This website is definitely for the open-minded people who want to connect with their fellow like minds. Even the curious and adventurous ones can pick something up from FetLife.

FetLife’s community is full of cool people. Well, at least we can vouch for the ones we were fortunate enough to have extended connections with. The community is extremely active which will make you be active in sharing your kinky exploits as well.

The bottom line is your kinky thoughts have a place on the internet where people can either learn or sharpen it. The case is the same for FetLife as it brings these kinds of people together.